Ask Dan Kirkbride Why He Votes Against the Second Amendment!

Ask Dan Kirkbride Why He Votes Against the Second Amendment!

In this race, there are very clear differences between the two candidates where our gun rights are concerned.

Dan Kirkbride is doing everything he can to hide the fact that he has been voting against gun bills in Cheyenne for years and that he co-sponsored FIX-NICS mental health gun control earlier this year — a bill that WYGO narrowly stopped!

But don’t take our word for it. To learn about the pro-gun bills that Kirkbride has voted against and the impact that his gun control bill would have had on Wyoming, watch our video report! 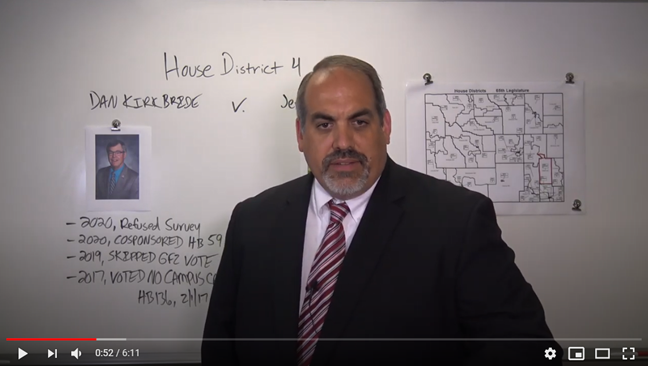 P.S. In House District 4, Platte County, Dan Kirkbride has a history of opposing our right to keep and bear arms, a history that he is desperately trying to keep secret from the voters in advance of the August primary!

Thankfully, Jeremy Haroldson has pledged 100% support for our gun rights!