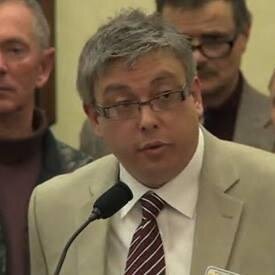 FROM THE DESK OF WYOMING SENATOR ANTHONY BOUCHARD

In all my years fighting as an activist for the Second Amendment, I learned that nothing controversial ever passes the legislature by accident.

And legislation doesn’t become law just because it’s a good idea or because ‘it’s the right thing to do.’

It usually takes tireless effort by well-trained activists — who have been equipped with the tools they need –- and who simply refuse to give up in order to force the legislature to take action!

That’s what happened in 2011, when we finally passed Constitutional Carry here in Wyoming, capping a long fight!

Now, as a State Senator just coming off my first year in the legislature who’s been on the ‘inside,’ I can assure you that this concept is truer than ever.

Far too many good bills die that should not.

Far too many attacks on our pocket book and freedoms make more progress than they should.

We need more activists — trained in the art of effective confrontational politics –- who know how to force legislators to vote on bills and who are willing to hold them accountable for their bad votes!

That has always been the key to passing or defeating legislation in Cheyenne.

That’s why I hope you’ll join me in Bar Nunn on Saturday, June 24, as WyGo hosts a 1-day political leadership school in conjunction with the Foundation for Applied Conservative Leadership!

The Foundation’s instructors are all experts in their field — with years of experience fighting for the Second Amendment — and they will be covering topics like:

>>>  How politics actually works, and why educating politicians about your cause won’t result in change in Cheyenne;

>>>  The greatest lie in politics, and how it can be used against you by legislators if you’re not careful;

>>>  Real-world leadership strategies for grassroots activists to ensure that you don’t ‘get spun’ when you set foot in the Capitol;

>>>  Practical tools on how you can run an election program of your own as early as 2018, to hold politicians accountable for their anti-gun votes;  and

>>>  How to start a political organization of your own, and how to raise the funds you need to be effective!

Having personally attended these training seminars in the past, I can assure you that you’ll walk away from this with the tools you need to actually be effective!

Gun owners were let down this session as Gov. Mead sided with the Wyoming Association of Municipalities and vetoed HB137 — legislation that would have ended ‘Gun Free Zones’ on government property here in Wyoming.

And of course, gun owners are still fuming over the Senate’s vote to block the advancement of Campus Carry, a bill I was happy to support.

If you’re upset about these votes, like I am, then please join me in Bar Nunn where you’ll learn how to get directly involved in the fight for your freedom.

Our state needs it.

Our future generations deserve it.

I hope to see you there.

P.S. Having worked as an activist on the outside, and now having spent a year on the inside as a State Senator, I can assure you that major legislation doesn’t become law by chance.

It takes tireless work from trained activists who have the tools they need to obtain votes on their legislation and the ability to hold legislators accountable!

That’s why I hope you’ll join me in Bar Nunn on Saturday, June 24, as WyGo and the Foundation for Applied Conservative Leadership host a 1-day political leadership school for gun owners!

I’ll be there and hope you will too. And if you register now, you’ll be able to get in at the ‘early bird’ rate of $40, which includes your lunch.

Not paid for or sent at taxpayer expense.