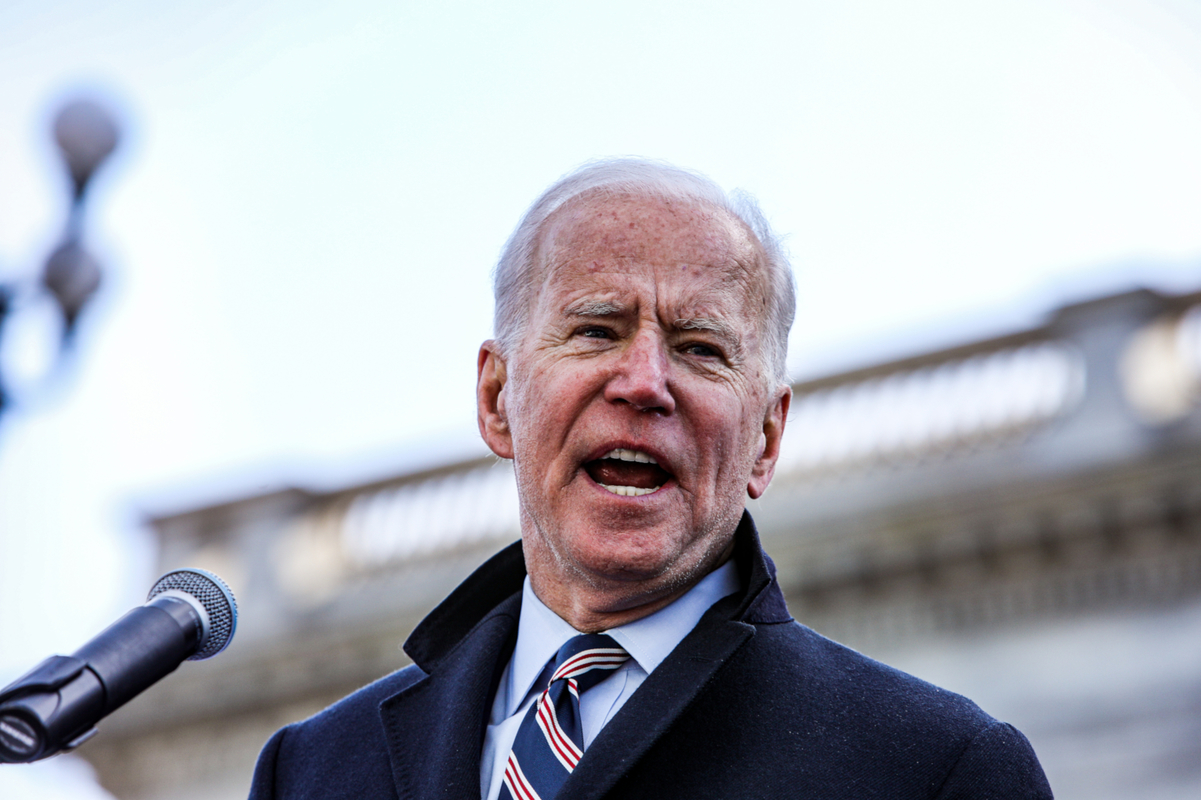 The 2021 legislative session in Cheyenne promises to be a big one for gun owners like you and me!

And while it’s still not clear when session will actually begin, the WYGO team has been working for several weeks to lock down our legislative goals for the year, along with the budget we need to fund them.

Like every other gun owner in America, I had hoped that President Trump would be in the White House for four more years.

But with the Supreme Court refusing to hear any cases challenging the election, and Congress certifying the results of the election recently, gun owners must get ready for four years of non-stop attacks on our right to keep and bear arms.

So while I would love nothing more than to put all of our energies into the fight for gun rights here in Wyoming, it’s clear that we need to devote significant resources to holding the line for freedom at the federal level, too.

That’s why I am writing you today.

Wyoming Gun Owners needs to decide how and where to focus our time and the generous financial resources that you entrust to us — and we need to decide very quickly.

And unlike federal gun groups that simply harvest their members donations and spend them on shopping sprees, private air travel, and massive salaries, WYGO is a grassroots organization that works for you. So, we need to hear from you, right away.

That’s why I have prepared your 2021 WYGO Membership Ballot, so we know where you want us to focus this year. Please read this update and then complete your ballot IMMEDIATELY!

The truth is that Wyoming Gun Owners spent a small fortune during the Primary and General elections last year, exposing anti-gun radicals like Sen. Michael Von Flatern, Rep. Dan Kirkbride, Rep. Bill Pownall, Rep. David Northrup, and over a dozen others across the state.

It was an incredibly successful program! Every single one of the gun-grabbers we exposed were booted out of office, and pro-gun champions like Senator Bouchard and Representative Salazar survived challenges from well-funded, anti-gun moderates thanks to educated gun owners.

But it came at a cost.

As things stand today, Wyoming Gun Owners has the resources to run a solid legislative program in Cheyenne or fight back against Biden’s gun control agenda in D.C. — but we can’t do both.

But before you tell me where you want us to focus in 2021, let me explain where things stand in Congress and in Cheyenne.

If Joe Biden is sworn in as President, he won’t waste any time before ordering Nancy Pelosi to unleash a massive attack against our right to keep and bear arms.

And while there are dozens of threats that we will have to fight against, Michael Bloomberg spent $100,000,000 trying to save Nancy Pelosi’s majority, and he has three primary goals.

At the top of the list, is passage of a national gun owner registration scheme, which is being sold to gun owners as harmless ‘Universal Background Checks.’

Make no mistake, there is nothing harmless about ‘Universal Background Checks.’

This legislation would criminalize all private party firearms transfers in America –- even those between fathers and sons — requiring you to be tracked, traced and registered like a sex offender every time you buy a gun!

Of course, the real purpose of this legislation isn’t to stop violent crime, as background checks have been proven to be utterly ineffective at stopping violent criminals and mass shootings.

No, Bloomberg and the radical left want to use these background checks to build a list of every gun owner in the country. Because before they can confiscate our guns, they first need to know where they are!

But as badly as they want to pass this national gun registry, Senator Dianne Feinstein and Nancy Pelosi are hoping

that 2021 will be the year they finally ban our AR-15’s (along with over 200 similar rifles) and every single magazine that holds over ten rounds of ammunition.

We all know why.

The AR-15 is the best tool available to proud Americans who want to guard against criminals and tyrants alike. That’s because it’s lightweight, holds plenty of ammo, and can be customized to almost any desired specification.

With an estimated 20 million of these rifles in circulation, it’s clear that the AR-15 has become THE symbol of American defiance to tyranny.

Joe Biden and his even more radical handlers know that they can’t succeed in turning this great country into a socialist nation — where only the government has guns — as long as rifles like the AR-15 are in private hands.

They simply must outlaw them!

But we can’t forget about the dangers facing us if Joe Biden is able to pass a national ‘Red Flag Gun Seizure’ law.

As you may know, ‘Red Flag Gun Seizures’ would allow government agents, teachers, even a bitter ex-spouse, to make up wild stories about you that would give liberal judges the ability to order your firearms to be seized before you’ve been charged or convicted of anything!

Worse, this legislation is drafted to allow the entire court proceeding to take place ex-parte (in secret) so you would have no ability to be present and defend yourself in court.

Some of the evidence that can be cited against you includes the recent purchase of a firearm or ammunition! So the mere fact that you exercise your Second Amendment rights can be used against you in a ‘Red Flag Gun Seizure’ hearing!

What makes this legislation a major threat in 2021 is the number of sell-out Republicans — like Lindsay Graham, Marco Rubio, Rob Portman, John Thune and others — who have already expressed their support for it.

Of course, these are just three of the threats that Wyoming Gun Owners will be on guard against next session.

The good news is that if we can pour enough pressure onto Capitol Hill, we can defeat this entire agenda in the House of Representatives, as Nancy Pelosi lost over a dozen seats last fall leaving her with the smallest Congressional majority in 100 years!

So if you think our top priority in 2021 needs to be holding the line against the radical left’s gun control agenda in Washington, please select OPTION #1 “HOLD THE LINE IN CONGRESS” on your ballot.

Of course, we have a fundamental obligation to safeguard our gun rights here in Wyoming, too.

By booting so many anti-gun Republicans out of office here in Wyoming last year, gun owners sent a LOUD message that the politicians in Cheyenne still haven’t forgotten.

Now it’s time to capitalize on that success and go ‘all in’ on our efforts to pass the Second Amendment Preservation Act.

SAPA legislation is designed to protect the gun rights that you and I currently have here in Wyoming from federal attacks, by mandating that Wyoming peace officers only enforce Wyoming’s gun laws, and only if they comply with the Second Amendment!

This legislative concept has been filed in the past, but those bills (not drafted by WYGO) were flawed because they required our anti-gun Attorney General, Bridget Hill, to prosecute violations of SAPA law.

That was foolish, as the Attorney General here in Wyoming has been an enemy to gun owners for years! Hill tried (and failed) to overturn our wonderful Stand-Your-Ground law and is currently trying to close WYGO down with bogus electioneering fines related to the 2020 primary and general election program.

Our legislation is very different.

Our sister organizations in states all over the country are doing this as we speak, because if federal gun control should pass into law under a Biden Administration, SAPA legislation will be the only protection that we have left!

At the same time, it’s high time that the legislature finally does away with deadly ‘Gun Free Zones’ here in Wyoming once and for all!

While Wyoming enjoys strong Constitutional Carry and Stand-Your-Ground laws, those don’t do you any good if you are attacked in any one of the hundreds of state-mandated ‘Gun Free Zones’ that we have here in Wyoming!

Every government building here in Wyoming is off-limits to gun owners, as is the University of Wyoming’s campus (along with all of their satellite campuses.)

Of course, these are EXACTLY the kind of locations that madmen love to attack. And why wouldn’t they? State law has made it easy for them to rack up a body count since they know that no one will be able to fight back in these areas!

This legislation has been blocked in Cheyenne for several years now by Speaker Harshman and Senate Majority Leader Drew Perkins. But after so many of their friends were booted out of office for their votes against the Second Amendment, we have a real chance at advancing this legislation this session.

But it’s going to be a fight, and we’ll need your help.

So if you think our top priority in 2021 needs to be fighting to repeal ‘Gun Free Zones’ and passing the Second Amendment Preservation Act here in Wyoming, please select OPTION #2 “FIGHT FOR THE SECOND AMENDMENT IN CHEYENNE” on your ballot.

I’m sure you can see why I’m so torn, there just aren’t any easy options.

But I must be realistic.

And right now, after our expensive election program last year, I just don’t have the funds to run a full-scale program at both the state and federal level at the same time.

That’s why I’m counting on you to please fill out your Wyoming Gun Owners Member Ballot and tell me where to focus the resources that we have.

Of course, when you do so, you’ll notice that I have included another option on your membership ballot –- an option that we haven’t talked about yet, because it’s just not possible without a major influx of funds.

Nevertheless, it’s the option that I am secretly hoping you will choose. And that’s OPTION #3: “FIGHT LIKE HELL TO CRUSH JOE BIDEN’S GUN CONTROL AGENDA WHILE DOING EVERYTHING POSSIBLE TO ADVANCE THE SECOND AMENDMENT PRESERVATION ACT AND REPEAL GUN FREE ZONES HERE IN WYOMING! FIGHT EVERYWHERE!”

Please note that if you select this option, I need you to dig deep and be as generous as possible, to help us put this plan into action.

But our Second Amendment freedoms and our very way of life are being threatened in a way that we’ve never seen before, and our children and grandchildren are counting on us to preserve their freedoms, as our forefathers did for us!

We need to be ready to fight for these bills the moment the legislature decides to really go into session and do their jobs — so I need to hear from you as soon as possible!

Please complete your Membership Ballot right away, and please make an emergency donation so that we can fight for you!

P.S. With Joe Biden likely headed to the White House, the 2021 legislative session will be a critical one for our gun rights here in Wyoming.

But after our wildly successful primary and general election program, I need to make some very difficult decisions about where to focus our resources and our time.

We just don’t have the resources we need to hold the line against the mounting gun control threats that are forming in Congress, while still working to advance the Second Amendment Preservation Act in Cheyenne.

So I need your immediate advice!

Please fill out your Membership Ballot right away, and please make an emergency contribution so that Wyoming Gun Owners can fight for you in D.C. and in Cheyenne!