As the dust settles on the 2020 primary election that concluded last night, one thing is becoming crystal clear, Wyoming Gun Owners is the most potent fighting force in Wyoming politics!

Last night was nothing short of a bloodbath for the careers of anti-gun moderates who were hoping that they could attack our Second Amendment freedoms and get away with it.

What Wyoming Gun Owners accomplished last night — all thanks to your support — is going terrify anti-gun Republicans in Cheyenne for years to come!

It’s hard to even know where to begin this after-action report, but we’ll start with making sure everyone knows the forces that were arrayed against gun owners.

The True Family doled out thousands of dollars to hyper-moderates during this cycle, as well. And the Diamond Free Enterprises PAC was recently set up to protect anti-gunners like Michael Von Flatern, Bill Pownall, and others.

Former Governor Matt Mead, who vetoed a significant WYGO bill in 2017 and who did everything he could to block Stand-Your-Ground law in 2018, jumped into this primary doing mailers against pro- gun candidates across the state.

Governor Mark Gordon also went after conservative candidates in this primary. He attacked Senator Anthony Bouchard in a press statement, in effect calling Anthony a liar.

Former U.S. Senator Alan Simpson’s family was weaponized (or, rather, they tried to weaponize themselves) against Wyoming Gun Owners and produced ‘hit videos’ on us.

And current U.S. Senator Mike Enzi rolled out an endorsement video two days ago, in a desperate bid to save Senator Michael Von Flatern.

As you can plainly see, WYGO members were going head to head with an incredibly powerful, politically-connected, and very well- funded establishment machine that was out for blood.

As everyone knows — and as multiple media outlets reported — this was all being done in a frantic effort by moderates to mute WYGO’s ability to expose anti-gun moderates prior to the primary.

Thanks to the incredible generosity of so many WYGO members, Wyoming Gun Owners was able to develop a micro-targeted program to expose anti-gunners in the House and Senate.

In some cases, we deployed our infamous digital ads.

See the ad that we deployed in the Bouchard/Johnson race here. Note that over 40,000 gun owners in SE WY saw this ad, which exposed Erin Johnson. 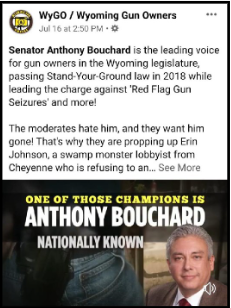 See the ad that we deployed in the Salazar/Bailey race here. As you can see, a stunning 51,000 people saw this ad, reminding people that Tim Salazar was the chief house sponsor for Stand-Your-Ground law! 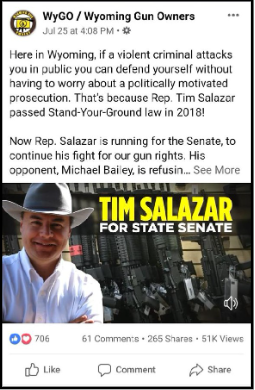 See the ad that we deployed in the McKeown/Von Flatern race, highlighting Michael Von Flatern’s decade-long war against the Second Amendment! 35,000 gun owners in and around Gillette saw this devastating ad! 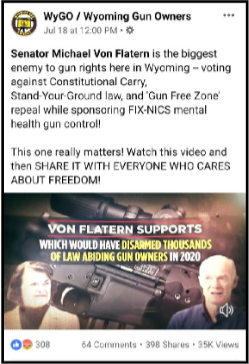 See the ad that we deployed in the Malmstom/Furphy race, exposing the fact that Dan Furphy tried to put gun owners in jail for the ‘crime’ of buying a handgun without submitting to a waiting period. Over 20,000 gun owners saw this spot! 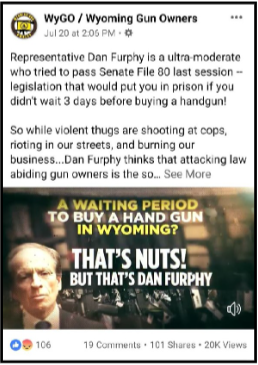 In other cases, we utilized good old fashioned ‘Whiteboard Videos’ where we broke down specific races and gave gun owners detailed information about the gun control votes that moderates were trying to keep hidden.

And they were wildly popular.

Our ‘Whiteboard Video’ in Von Flatern’s district, for example, was seen by over 45,000 gun owners and shared almost 450 times! 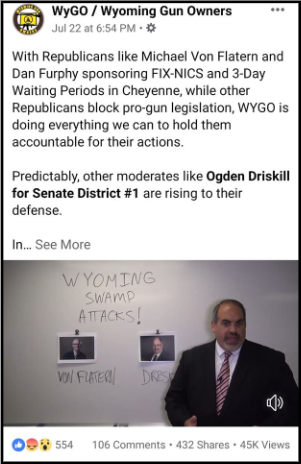 Bill Pownall, the politician who sponsored FIX-NICS legislation but was doing all he could to keep that a secret in his district, was reportedly mortified to learn that WYGO revealed this to 17,000 in and around House District 52! 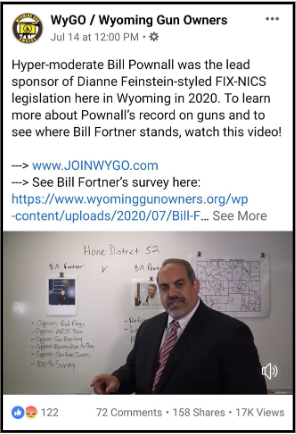 In other races, we used our powerful direct mail program to combat the half-truth, lies, and B.S. being put out by anti-gun candidates. WYGO’s mail program is very thorough as we have the largest list of gun owners in the state!

In the picture below, you can see some of the mail that WYGO deployed being delivered to the postal service! 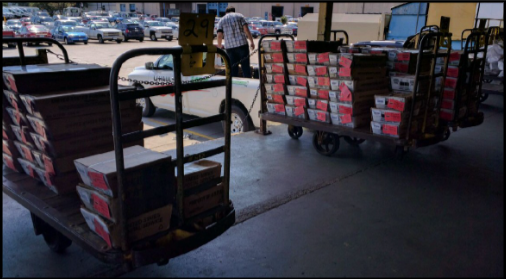 In certain races, WYGO rolled out a withering number of radio ads that left a mark! We used radio in situations where we had extra money to spend but had no time to produce mail or additional digital ads.

Hear our radio ad in Park County, here. We deployed this radio ad over 160 times, reaching tens of thousands of people!

Hear our radio ad in Laramie County, here. This ad went out close to 150 times, informing everyone in and around SD-6!

Hear our ad in Campbell County, here. This blanketed Gillette and these ads (close to 125 of them) went on for days and days!

In some races, we used a combination of all of the above, blending mail, email, digital ads, ‘Whiteboard Videos,’ radio ads — everything we had to make sure that gun owners knew the truth!

Once we did our job and gave gun owners the facts they needed to cut through the lies and spin coming from desperate moderates, gun owners took swift and absolute action!

Each of the races below are races where WYGO was heavily involved in exposing gun grabbers and highlighting the records of pro-gun candidates.

Incumbent Dan Kirkbride was defeated by Jeremy Haroldson, by over 6% in Platte County! Kirkbride had been a leading proponent of FIX-NICS gun control in committee last year!

Incumbent Bill Pownall was defeated by Bill Fortner in a tight race in Campbell County — where Pownall’s sponsorship of HB-59 (FIX-NICS) earlier this year became a major issue in the campaign!

Incumbent Michael Von Flatern (Campbell County) was defeated by Troy McKeown by a jaw dropping 28% — by far the biggest rout of the night!

Bob Wharff, from Uinta County, crushed Joy Bell for control of House District 49. Wharff grabbed 60% of the vote in this race!

Gillett’s Representative Roy Edwards was facing a stiff primary from a notoriously anti-gun Tom Murphy. Edwards won his race with 58% of the vote, securing two more years in House District 53.

And last but not least, WYGO’s former Executive Director-turned State Senator Anthony Bouchard (SD-6, Laramie County) survived what was assuredly the most coordinated attack that the established launched this cycle — by defeating Erin Johnson with 161 votes to spare!

Last night, WYGO members delivered a beating to anti-gun Republican moderates that will not be forgotten by the Swamp for a very long time. That message is simple:

Anyone who attacks our great Second Amendment here in Wyoming will pay the price during the primaries. Anyone who follows moderate caucus leaders in Cheyenne, hoping to play it safe by refusing the fight for gun right will also pay a price. Token support is no longer enough. Fight for gun rights, or we’ll find someone who will!

And you sent this message despite everything that the establishment threw at you!

Thank you so very much for everything you did!

Every donation you made, every video you shared, every call you made to question candidates, it all led up to our success last night!

We Can Never Stop:

But this fight for freedom never ends.

We have three to four general election races coming up where WYGO must be active in educating and informing the voters. And the 2021 session will be key in our fight for gun rights.

After this wildly successful — but wildly expensive — primary effort on the part of Wyoming Gun Owners, we desperately need to recapitalize to maintain the fight here in Wyoming.
We need your help now!

If you’re a member, please consider an immediate donation to help WYGO get back to full strength right away!

If you’re not a member, we need you now. Clearly no one fights like WYGO. You’ve seen this firsthand. But now we need you to commit to this fight by joining WYGO today!

Either way, thank you for being a part of our fight!

P.S. The 2020 primary election recap is above, and it’s a report that you can not afford to miss!