With the election just days away, Wyoming Gun Owners has rolled out a final video update that you simply must see!

You see, Mary Throne is doing everything she can to whitewash her record on the Second Amendment and lie to gun owners.

On the other hand, Mark Gordon has publicly pledged to back WYGO’s entire legislative agenda — including his pledge to sign our bill to repeal deadly Gun Free Zones –- when he signed our candidate survey!

For all the details on both Throne and Gordon’s public views on the Second Amendment, check out this video update! 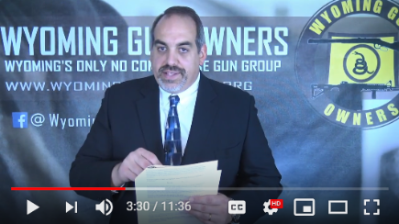 Now that you’ve seen this, please take action right away.

>>> Second, donate to WYGO to make sure we can continue to broadcast these updates on our social media platform until the very end of the campaign cycle!

>>> Third, thank Mark Gordon for publicly pledging to fight for gun owners by signing his WYGO survey 100% pro-gun, by sending him a message on his Facebook page.

>>> Fourth, let Mary Throne kow what you think of her record on your gun rights, as well as her attempts to lie about it now, by sending her a message on her Facebook page!

This election season has been very unpredictable, in fact, the nearby South Dakota gubernatorial election is running at a dead heat according to recent polling!

We can’t take anything for granted.

P.S. With the election just days away, WYGO has rolled out this final video update that I hope you’ll take a moment to watch!

One gubernatorial candidate is lying to gun owners about her record, while the other has publicly pledged to fight for gun owners and oppose radical gun control!

Watch the video here and then take immediate action using the information provided above!

Stand Up for Your Gun Rights – Vote Pro-Gun Today!

News from Other States