“This [passing Red Flag Gun Seizure legislation] is the single most important thing I think we can do, in the gun control area…”

Care to guess who said this?

I’ll give you a hint, it wasn’t Senator Dianne Feinstein.

And it wasn’t Senator ‘Spartacus,’ Senator ‘Pocahontas,’ or anyone from the Bloomberg-backed gun control organizations.

This quote came from Attorney General nominee William Barr, during his confirmation hearings earlier this week in front of the US Senate Judiciary Committee.

The answer came as Senator Feinstein was questioning Barr about his views on the Second Amendment, especially if he would support her efforts to ban hundreds of variants of the ever-popular AR15.

Rather than tell her ‘NO,’ Barr proceeded to tell Senator Feinstein that he wants to see ‘Red Flag Gun Seizure’ legislation passed into law, to address the issue of mass shootings.

I have to tell you, I was in the middle of doing a Facebook live update while driving when WYGO members first informed me about this, and, at first, I hoped they had heard him wrong.

But when I saw the video for myself, my jaw dropped.

You can check out the video exchange for yourself, right here. 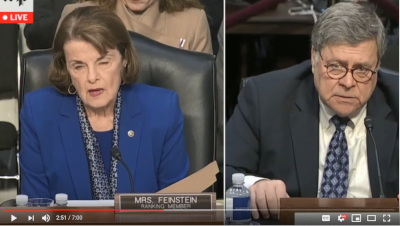 With this one statement, William Barr has made it clear that far from fighting for the Constitutional right to keep and bear arms, he’s willing to go along with the radical gun-control lobby in Washington, D.C.

That’s why I hope you’ll take a moment to send our PRE-WRITTEN EMAIL to US Senators Enzi and Barrasso, urging them to oppose William Barr’s nomination!

‘Red Flag Gun Seizure’ legislation is the most dangerous attack on our gun rights in a generation. Consider what’s at stake.

>>>   These gun seizure orders will be issued before you have been

convicted, or even charged, with anything!
A gun owner, with absolutely no criminal background of any kind, can have his firearms seized before he ever sets foot in a courtroom.
You would have more due process rights in traffic court than you would in defending your constitutional right to keep and bear arms.

firearms happen in secret!
Known as ex-parte proceedings, these hearings take place in your absence. You will have no ability to question your accuser, provide your own evidence, or testify in your own defense.
In fact, the first time you will be made aware of this is when law enforcement officers come to your home to seize your firearms.

>>>   The mere fact that you recently purchased a firearm or any

ammunition constitutes evidence that can be used against you!
Under the list of ‘evidence’ that the court can consider in deciding to disarm you, is the ‘recent acquisition of a firearm, ammunition, or other weapons.’
So just buying a firearm or a box of .22’s could be enough for a judge to order you stripped of your firearms.

And instead of our next Attorney General fighting to defend the right of due process — not to mention the 2nd, 4th, and 6th Amendment — William Barr is eager to work to implement this attack on gun owners at the national level!

I don’t know about you, but hearing Senator Feinstein giggle with excitement about the thought of passing yet another gun control bill into law makes me sick!

We need Senators Enzi and Barrasso to stand up and fight for gun owners, by opposing William Barr’s nomination as Attorney General.

As you’ll see, sending your email takes just seconds, as the email is pre-written and goes directly to Senator Enzi and Barrasso’s inboxes.

Please fire off your emails immediately!

And if you haven’t yet renewed your membership in Wyoming Gun Owners for 2019, I hope you’ll do so right away!

P.S. William Barr’s aggressive support for ‘Red Flag Gun Seizure’ legislation, which violates the 2nd, 4th, and 6th Amendment, makes it clear he must not be confirmed as our next Attorney General!

Please email Senators Enzi and Barrasso immediately, and insist that they fight for gun owners, by opposing William Barr’s nomination to be our next Attorney General.

The fight for gun rights is raging both here in Cheyenne and in Washington, D.C.; please make sure you’ve renewed your membership in Wyoming Gun Owners for 2019!