Gun owners all over Wyoming are outraged about Mary Throne’s recent promise to veto our legislation to do away with deadly ‘Gun Free Zones.’

Of course, having passed Stand-Your-Ground law this year, our attention will be heavily focused on ‘Gun Free Zones’ next session.

But I thought it would be helpful if we took a moment to consider exactly how deadly Mary Throne’s gun-control agenda for Wyoming really is.

After all, we all know that madmen specifically target these so-called ‘Gun Free Zones.’ But can you even guess how many innocent people have been wounded and killed in these locations?

I could not either.

That’s why I asked our Policy Advisor, Aaron Dorr, to produce the following video update, to make sure we all know what Mary Throne’s anti-gun crusade looks like in the real world.

You can watch it here. 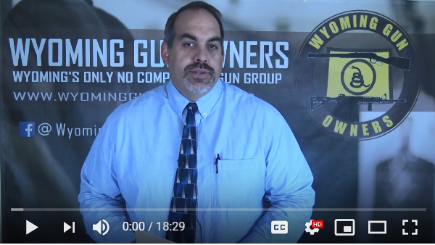 The sheer numbers are absolutely staggering.

Tens of thousands of family members forever impacted, in twenty cases over the past ten years.

Before a mass shooting happens in a ‘Gun Free Zone’ here in Wyoming, let’s change the law and make sure that every law-abiding gun owner has a chance to FIGHT BACK!

Thankfully, Mark Gordon has publicly promised to sign this bill into law, in addition to promising to oppose gun control in any form.

To learn more about where Mark Gordon stands on your gun rights, check out his signed candidate survey here.

In the meantime, please make sure that Mary Throne’s war against gun owners does not get swept under the rug — share this video update with every gun owner you know by forwarding this email or posting the video on your Facebook page!

And if you are not yet a member of Wyoming Gun Owners, please join up right away.

But when you watch our video update — giving you the horrific reality of the impact of the ‘Gun Free Zones’ -– you’ll be downright furious!

This is the reality of Mary Throne’s radical gun control agenda! Make sure every gun owner you know sees this!

Who Will Fight for Gun Owners as Governor?